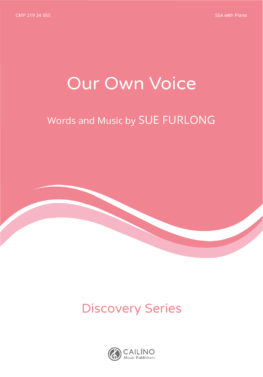 Uplifting, strong and very moving song, calling on us to really listen to the ‘voice’ struggling to be heard.

Our Own Voice by Sue Furlong is an uplifting, strong and very moving song, calling on us to really listen to the ‘voice’ struggling to be heard.

Originally from the ‘Voice Thief‘ musical (available on Sue Furlong Music), which follows the adventures of a young boy, whose voice has been stolen by a wicked scoundrel, and who tries to silence him by imprisoning his voice in a deep and scary place called Cachophony Chasm, this song will stand out in any concert as a profoundly beautiful finisher. It can have a very strong effect when it is accompanied with sign language gestures.

Can be sung by unison voices, with solos, and the added option of a 3 part harmony.

Listen to an audio of a live performance with orchestral arrangement by Liam Bates at the “Cherish the Children” concert in Enniscorthy, Ireland on 1st January 2016